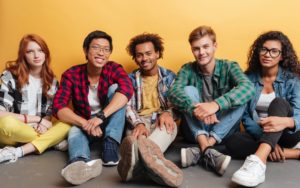 Challenge Based Learning often includes working in a group* to research a Challenge, and develop, implement and evaluate solutions. When forming groups for Challenges there are benefits and detriments to both self-selected and externally created groups. An interesting perspective on the value of diversity in groups emerges from the research of Phillips, Liljenquist and Neale (2010). This research found that heterogeneous groups performed better than homogenous groups when solving problems. In particular the addition of an “outsider” to established groups not only brings about new information but also changes the flow of the group. The “outsider” forces the original group members to attend more closely to information and consider their alliances with other members. The result is new ideas and opinions that would have never been considered if the group had remained homogenous.

Homogenous groups are primarily concerned about relationships and often avoid difficult discussions. This can stifle opportunities for conflict and struggle that often leads to new ideas and innovation. Interestingly the research showed that homogenous groups are more confident in their decisions even though their conclusions were more often incorrect. For the heterogeneous groups the results flipped with better conclusions and less confidence.

The “outsider” added to homogenous groups does not need to be an individual. The musician Brian Eno developed a set of cards (Oblique Strategies) that could be randomly selected when bands or artists hit blocks or were struggling with their creativity. The cards made the artists stop and try something completely different, in effect “shaking things up” in a similar way as adding a new, diverse thinker to the group. A similar iOS app called CBL Nudge has been created to help support and  shake up the process during a challenge.

Explore the 2015 TedTalk by Tim Harford: How frustration can make us more creative for more on these ideas.

* Note: This does not mean that challenges always need to be addressed as a group. The ability to work independently and in a group is critical for success beyond the four walls of the classroom. In reality, most work and personal environments flow between independent and group work. Giving students opportunities and strategies for both types of work is critical.

← One Best Thing Series Big Idea: Water →
We use cookies on our website to give you the most relevant experience by remembering your preferences and repeat visits. By clicking “Accept All”, you consent to the use of ALL the cookies. However, you may visit "Cookie Settings" to provide a controlled consent.
Cookie SettingsAccept All
Manage consent

This website uses cookies to improve your experience while you navigate through the website. Out of these, the cookies that are categorized as necessary are stored on your browser as they are essential for the working of basic functionalities of the website. We also use third-party cookies that help us analyze and understand how you use this website. These cookies will be stored in your browser only with your consent. You also have the option to opt-out of these cookies. But opting out of some of these cookies may affect your browsing experience.
Necessary Always Enabled
Necessary cookies are absolutely essential for the website to function properly. These cookies ensure basic functionalities and security features of the website, anonymously.
Functional
Functional cookies help to perform certain functionalities like sharing the content of the website on social media platforms, collect feedbacks, and other third-party features.
Performance
Performance cookies are used to understand and analyze the key performance indexes of the website which helps in delivering a better user experience for the visitors.
Analytics
Analytical cookies are used to understand how visitors interact with the website. These cookies help provide information on metrics the number of visitors, bounce rate, traffic source, etc.
Advertisement
Advertisement cookies are used to provide visitors with relevant ads and marketing campaigns. These cookies track visitors across websites and collect information to provide customized ads.
Others
Other uncategorized cookies are those that are being analyzed and have not been classified into a category as yet.
SAVE & ACCEPT